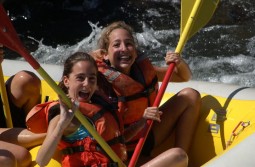 During the 1850s, when the gold-rush was reaching its peak on the south fork american river in Coloma, an interesting thing began taking place. Cultures began mixing their food and music, they shared stories, experiences and jokes. As they sat around the campfires, they learned from each other. As they worked in the mines in the hills and the dredges in the river, they began mixing their skills and talents.

160 years later, not much has changed. Now, however, rafters – not miners- mix their food, music and jokes. People come from all over the world. Raft guides in particular come from all corners of the earth with their music (Costa Rican salsa, New Zealand hip-hop, Irish punk-rock) and their stories and experiences. They learn different styles of running rivers, steering rafts, cooking tri-tip steaks. Much like the old miners, rafters sit around the campfire after work and swap stories and jokes. Considering that Whitewater Connection camp is 300 yards downstream of Sutter’s Mill, where James Marshall found the first gold nugget in 1848, it’s likely that rafters sing and laugh on the same spots along the South Fork American River as miners did.

How cool is that?