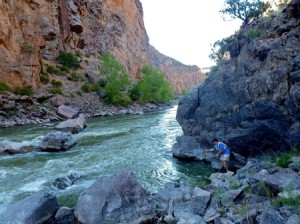 Unlike the almost inaccessible depths of the Gunnison River canyon within the National Park, several good hiking trails provide access to the canyon within the Gorge. It is one of the most beautiful and accessible wild areas to be found in the United States.

Much of the attraction is due to the spectacular geologic formations, which document a geological history spanning a third of the age of the Earth itself. The scenery and geology of the Gunnison Gorge is reminiscent of the Grand Canyon of the Colorado.

Getting to the river requires an easy mile-long hike down a narrow trail; the boats and group gear are brought into the canyon on horseback the day before the trip. You will need to carry your own personal gear down the trail to the “put-in”. The hike is rewarded with dramatic canyon scenery, picturesque views and remarkable solitude. Only two groups of twelve people per day are permitted to raft the Gunnison Gorge, assuring you a quality wilderness experience.

The Gunnison River is near Delta and Montrose in western Colorado, just south of Grand Junction.